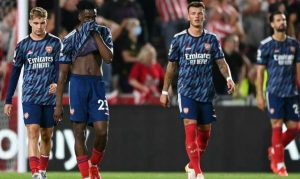 With games against Chelsea and Manchester City coming up, Arsenal needed to get off to a good start at Brentford, but instead they have lurched into crisis mode after just 90 minutes of the new season, falling to a 2-0 defeat at their newly promoted hosts.

“Sacked in the morning!” the Brentford fans chanted at Mikel Arteta. Clearly, that will not be the case.

But it won’t be too long before Arsenal’s manager does find himself under real pressure if his side don’t start picking up points.

For the past two years, fans have been told to ‘trust the process’. But trust can only last so long if you don’t get anything back in return.

And, as it stands, this Arsenal side looks no different from what we’ve seen time and time again on Arteta’s watch.

Yes, their preparation was far from ideal, with both Pierre-Emerick Aubameyang and Alexandre Lacazette having to drop out due to illness, but this is not a time for excuses.

“We had a team that we put out there that were good enough to play the way we want to play and were capable of achieving a different result,” Arteta said after the game.

The simple fact is that Arsenal have had all summer to prepare themselves for the start of what was always going to be a huge season, yet they have gone into it woefully underprepared.

The creativity problem that plagued them last season has yet to be addressed. Martin Odegaard may well arrive from Real Madrid before deadline day, but by then Arsenal will already be playing catch-up.

With games against Chelsea and Manchester City to come next, there’s every chance they could head into the international break at the end of the month with nothing to show from three games and propping up the Premier League table.

“We are very clear of what we wanted to do, of what our strengths are and where we can improve” Arteta said, when asked if the defeat would prompt some urgency in the transfer market.

“I don’t think this performance shows anything different from what we’ve already seen.”

“My focus [now] is with the players that we have, to try to make them play as best as possible and to try to find a way to win football matches.”

They now have just over a week before they welcome reigning European champions Chelsea to Emirates Stadium and they simply must have some new faces on board before that game.

Get the deal done for Odegaard, get a goalkeeper in who can challenge the increasingly hapless looking Leno for the No.1 spot, and try to find a new striker who can add something different to a toothless attack.