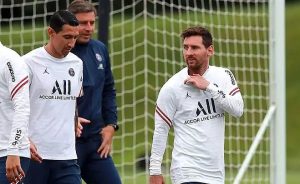 Angel Di Maria has opened up on how Paris Saint-Germain players are doing whatever it takes to help Lionel Messi to adapt to his new surroundings, following his move to Paris last summer.

The Argentine, who recently won his seventh Ballon d’Or, got off to a slow start at PSG and hadn’t registered his first Ligue 1 goal until November 20 in a game against Nantes.

Yet, Di Maria is confident that Messi is gradually integrating into the team.

“It is normal that there’s lot

“I think that in the last game against Club Brugge we showed that we are doing well,”

“It is normal that there’s lot of expectation with the arrival of Messi.

I think that people always expected a 4-0 or 5-0 win. Football is not like that.

Football is going little by little and putting together the pieces.

“We see him happy at home with his family. His children are at school.

Everyone is there to make life easier for him and that is how he has adapted very well to the group and, I think, he adapted very quickly to [life in] Paris.

“But when it comes to football, everything is being done little by little.

It is a huge change for him and he has to adapt to new players and a new way of playing at a PSG, who play fast in attack while Barcelona are used to having possession.

We try to balance all of that a bit and he also makes sure he adapts to us and vice versa.”

Mauricio Pochettino has recently been at the receiving end of criticism for his team’s poor performances, but Di Maria urged fans to back his coach.

“It is not easy for Pochettino.”

“Only 11 men play and he has to work with that. It is not easy to keep everyone happy.

It is what he tries to do, doing the best for the team and then you have to deliver on the pitch.”