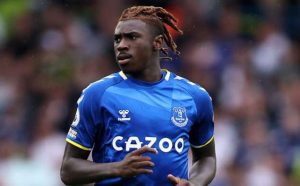 The forward has rejoined the Bianconeri two years on from his initial departure,

Italy striker Moise Kean has returned to Juventus on loan from Everton for the next two seasons.

but, didn’t make the impact in the Premier League supporters at Goodison Park had hoped for.

The 21-year-old was loaned to Paris Saint-Germain after a disappointing debut season,

with the Toffees and he impressed in France before returning to Merseyside in June,

but, the decision has now been taken for him to head back to Italy.

Juve confirmed Kean’s arrival in an official statement, which reads:

“Juventus Football Club announces that it has reached an agreement with Everton for,

the acquisition, on a temporary basis until 30 June 2023, of the player Moise Kean.

“The agreement provides for the obligation on the part of Juventus to definitively,

acquire the right to the player upon achieving certain sporting objectives during the 2022-23 season.

The agreed consideration for the acquisition is €28m, payable in three financial years.

In addition, cumulative bonuses of up to €3m upon the achievement of further objectives.”

Kean was restricted to just 39 appearances in all competitions for Everton over the past two years,

with his latest outing coming in a 2-1 League Cup win against Huddersfield Town last week – during which he received a red card for misconduct.

The Italian frontman only managed to find the net on four occasions for the Toffees.