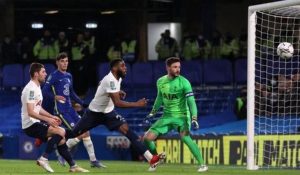 Chelsea deservedly beat Tottenham in the first leg of the Carabao Cup semi-final, but had so many chances they should have already sealed their place at Wembley.

when he ran onto Marcos Alonso’s through ball and fired home with Davinson Sanchez unable to keep the shot out on the line.

Read Also: Tuchel Ignored To Copy Antonio Conte To Get Best Out Of Lukaku

The Blues’ second was a comedy own goal as Japhet Tanganga headed the ball into team-mate Ben Davies‘ shoulder and it flew into the net.

Romelu Lukaku, back in the team after a one-game exile for comments he made in an interview, had several chances and headed wide from close range.

Spurs, who changed to a back four after a torrid first half, had to wait until the 50th minute for a shot, with Harry Kane’s free-kick saved by Kepa.

But the chances continued to come for Chelsea with Hugo Lloris denying Lukaku, Hakim Ziyech and the returning Timo Werner.

Spurs will need to be much better in a week’s time in the second leg to have any chance of reaching Wembley.

Liverpool and Arsenal play in the other semi-final with their games on 13 and 20 January after the first leg rearranged because of Covid cases in the Liverpool camp.