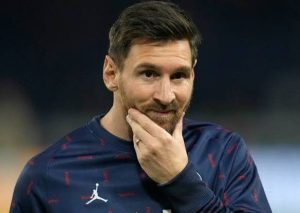 The Argentine forward Lionel Messi hasn’t enjoyed the best start to 2022, having had to spend the turn of the year in COVID-19 isolation.

But now the former Barcelona striker is now back in Paris and ready for the many challenges that this year will throw at him.

For the 34-year-old, 2022 could become one of the most memorable years of his career.

Following on from a momentous 2021 in which he won the Copa America and left Barcelona.

Now at Paris Saint-Germain and with a World Cup at the end of the year.

There are some fresh challenges for the forward and we discuss four of them here.

They say ‘anything can happen in football’, but there’s only the smallest fraction of a chance of PSG not winning the 2021/22 Ligue 1 title.

They currently lead second-placed Nice by 13 points at the halfway stage.

This means Messi is set to add a new league title medal to his collection, after winning LaLiga Santander 10 times.

However, the Argentine wants to play a significant role in every title pursuit.

Meanwhile he hasn’t had much of an impact in the French league so far, playing in just 11 Ligue matches so far and scoring just one goal.

While he has provided five assists, we’re used to seeing Messi with eye-popping stats each league season and he’ll want to put this right before the end of this campaign.

Read Also: Tuchel Ignored To Copy Antonio Conte To Get Best Out Of Lukaku

While he hasn’t had too much of an impact domestically,

Messi has been performing to his usual level in the Champions League.

In that competition, he has scored five of his six PSG goals so far.

Finishing second in their group, though, means PSG face Real Madrid in the last 16.

Messi will have to be at his best as the Parisians look to conquer their Spanish counterparts, especially if Neymar can’t return from his injury in time.

Messi and co. will hope to not just beat Real Madrid, but to go all the way and to win what would be the club’s first ever Champions League.

That would be Messi’s fifth and would make him a PSG legend in the eyes of the fanbase.

Messi usually has his birthday in the middle of a World Cup, but that won’t be the case this year as the Qatar tournament takes place in November and December.

The Argentina captain celebrates his next birthday on June 24 and will be 35 and a half at this winter’s tournament.

With the World Cup the only major tournament left for Messi to add to his unrivalled CV and with this surely his last chance to participate.

The Albiceleste’s No.10 will be giving his all to go one step better than he did by reaching the 2014 final.

Having finally won a trophy for Argentina with last year’s Copa America,

some of the pressure is off Messi’s shoulders, while he also knows that Lionel Scaloni’s squad is a well-constructed one.

Should Messi win the Champions League or the World Cup then he will once again be a favourite to win the Ballon d’Or award.

Even if he doesn’t win either of those tournaments,

he could still be in with a chance of the individual prize, as he won the 2021 edition without going beyond the Champions League last 16.

If he does, it would be his eighth Ballon d’Or victory, adding to what is already a record tally.