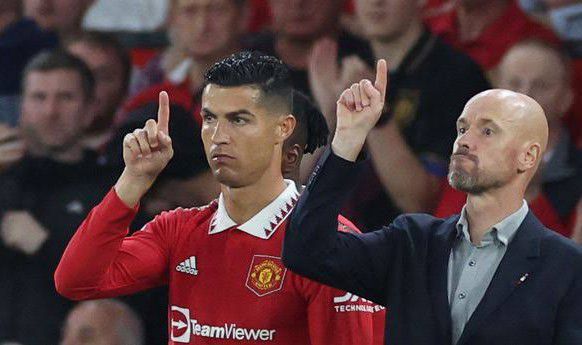 The 37-year-old Portuguese international wanted to leave the club after United failed to qualify for this season’s Champions League.

He was linked to an array of European clubs over the course of the transfer window,

with the most recent being Italian side Napoli and his former team Sporting Lisbon,

but no credible offer has come in and the club seem set to retain the player, who has one year left on his current deal, as well as a potential one-season extension.

While Ten Hag was believed to be open to his departure, speaking at a press conference on Wednesday he was asked about the possibility of more players coming in besides Newcastle goalkeeper Martin Dubravka,

“I think that for this window, that will be the end. When there is great opportunity you always have to be alert at this top club.”

Asked about what Antony’s arrival means for Ronaldo’s future, he said that there was no suggestion Ronaldo would be leaving.

And asked specifically whether Ronaldo was part of his plans, Ten Hag was resolute.

“We need quality players. You need more to cover all the games and to keep the consistency going.

That is what we strive for.”

As for Aaron Wan-Bissaka, who was linked with a swap for Barcelona right-back Sergino Dest, Ten Hag predicted no more movement.

“Of course, Aaron Wan-Bissaka will stay in.”

“So this squad, we will go from September to minimum January, but we will play with this squad this season.”