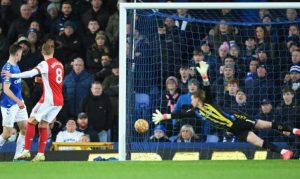 After being thumped 4-1 by Liverpool and director of football Marcel Brands leaving the club, Rafael Benitez’s team responded with a much-improved display that showed the character and resilience fans were looking for.

That the winner came after Richarlison had also had two goals ruled out for offside by the video assistant referee before getting the equaliser will only have added to the home fans’ delight.

The scenes at the final whistle were a complete turnaround from last Wednesday, when the mood turned ugly after a 4-1 defeat by their city rivals.

Victory lifts Everton to 12th in the table, eight points above the relegation zone.