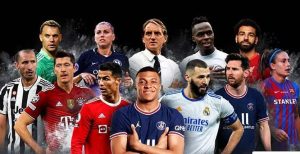 while some of the players up for the big prizes include Lionel Messi, Kylian Mbappe, Robert Lewandowski, Cristiano Ronaldo, Jenni Hermoso and Alexia Putellas.

Voting to decide the winners officially closed on December 20, and today we will see which players, coaches and directors take home the awards.