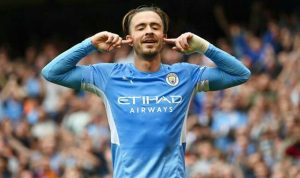 The British record transfer signing scored his first goal on his home debut as the,

Pep Guardiola believes that Jack Grealish has the quality to emulate Raheem Sterling’s,

vital goalscoring contribution after netting his first goal for Manchester City on his home debut.

The £100 million British transfer record signing scored the second in the 5-0 victory over Norwich City,

as the Premier League champions quickly recovered from their opening weekend defeat to Tottenham.

The former Aston Villa midfielder has never scored more than 10 goals in a season but Guardiola said he has the quality to match Sterling,

who has been a pivotal part of City’s success after questions about his finishing following his move from Liverpool.

Read Also: Nicolas Pepe Is Full Of Enthusiastic For The Return Of Fans Against Chelsea

“If he gets the mentality to score goals like Raheem then yeah [he can],” Guardiola told a press conference about Grealish,

having the same impact as Sterling who has scored more than 20 goals in three of his last four seasons.

“Raheem, when I arrived here, four or five years ago, didn’t have the goal in his mind. That immediately changed.

“Today Raheem scored a goal because he arrived in the central position like a nine.

He is a machine there. Since the first season he changed his mind and decided I am going to score, score, score.

“I don’t know if Jack has that mentality that I’m going to score a goal and win games,

I have to discover it. Of course with his quality, he can do it.”

Also Read: Ronaldo Assured Allegri He Is Staying At Juventus Despite Transfer Speculation

Grealish didn’t know too much about his first goal for the club, with the ball ricocheting in off his knee,

but City were already ahead through a Grant Hanley own goal.

Aymeric Laporte, Sterling and Riyad Mahrez added second-half strikes and in some ways it made a mockery of City’s desperate need for a striker,

particularly as Gabriel Jesus, the only recognised centre-forward at the club, started as a right winger and set up three of the five goals.

“If he plays 10 minutes, no matter what position, central, right, left, he’s always ready to help and do what he has to do for the team.

“For us, it’s a privilege to have him with us.”