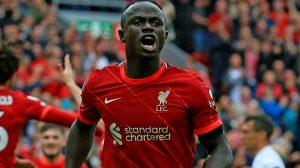 The Senegal star sealed maximum points for the Reds with his second-half goal at Anfield on Saturday.

Sadio Mane has become the fifth Liverpool player to score 50 or more Premier League goals at Anfield with his strike against Burnley in their 2-0 win on Saturday.

The 2019 African Footballer of the Year joins club legends Robbie Fowler, Steven Gerrard, Michael Owen and Egypt’s Mohammed Salah on the list of players who have achieved such a feat.

After Diogo Jota opened the scoring in the 18th minute, Mane finished off Trent Alexander-Arnold’s assist in the 69th minute to open his goal account for the 2021-22 season.

The strike sealed Liverpool’s second straight win in the Premier League after a commanding 3-0 victory at Norwich City last Saturday.

Alexander-Arnold’s assist for Mane in the encounter boosted the connection between the two players. It was the England right-back’s ninth assist for the former Southampton star in the Premier League, four more than he has provided for any other player in Jurgen Klopp’s team.

Mane, Cameroon’s Joe Matip and Salah were on parade for the duration of the game but the Egyptian star could not reach a century of goals in the English top-flight on Saturday.

With 98 goals in 160 appearances, the two-time African Footballer of the Year found the back of the net earlier in the first half but it was ruled out for offside by the VAR.

Guinea captain Naby Keita was also in action for the Reds, though he was replaced by Thiago Alcantara in the final 10 minutes of the game.

The result powered Liverpool to the summit of the Premier League table with six points from two games, pending the outcome of other matches while Burnley are winless in their first two outings.

Also Read: Nicolas Pepe Is Full Of Enthusiastic For The Return Of Fans Against Chelsea

Next up for Liverpool is a league fixture against Chelsea at Anfield next Saturday and Mane will be aiming to build on his scoring form while Salah will be targeting the landmark goalscoring feat.