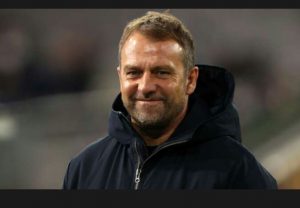 The former Bayern Munich head coach was inspired by what he saw from Die Mannschaft’s rivals at Euro 2020
Hansi Flick said he would seek to emulate the competitive spirits of Italy and Spain as he pledged to return Germany to glory in his first press conference as head coach of the national team on Tuesday.
The former Bayern Munich boss, who has taken over the DFB for Joachim Low, was impressed with the “enthralling” intensity and passion of those sides at Euro 2020. Both teams made surprise runs in the tournament, with Italy hoisting the trophy and Spain reaching the semi-final.

So, Flick will try to instill that upbeat, high-pressing style in Germany’s squad following a last-16 defeat to England in Low’s final match at the helm.

“Obviously our aim is to get back to the top of world football,” Flick said. “It won’t be easy, but our team is in good shape and we have a huge amount of quality.

“It’s not something that can happen overnight, but we’ll give everything to reach this goal.

“We saw the intensity and passion in Spain and Italy’s matches and it was enthralling. They tried to put their opponents under pressure early on, win the ball high and use set pieces to make things happen in the game.

“We can learn from the best, and try to take these things into our own matches. Step by step, we have to try to get back to where we want to be.”

The 56-year-old added: “When you attack early as a unit, the way to the opposition goal is shorter. If you try to switch things quickly you have a higher chance of success. That’s what we want to see from our team.”