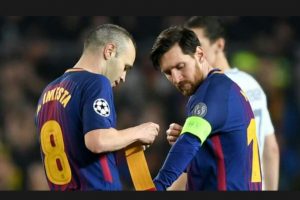 Barcelona legend Andres Iniesta says it will “hurt” to see Lionel Messi in another club’s shirt as the Argentine’s move to Paris Saint-Germain has been confirmed.
Messi has agreed a two-year contract to join PSG, ending his record-breaking career as a member of Barcelona after the club proved unable to re-sign him this summer.

Iniesta is among the millions of Barca fans left heartbroken by Messi’s exit as the legendary midfielder said that the Argentinian icon represents everything great about the club.

What did Iniesta say?

“I don’t know what happened internally, nor how things unfolded, but the club will need to recover from this transfer,”

“It will hurt to see him in another team’s shirt. Leo personifies Barcelona. He was everything, he’s a player who transcends the team. I’ve never seen a player like him and I don’t think I ever will.

“[Barcelona] will continue to be one of the best teams, one of those that has to be on the summit.”
Iniesta’s history with Messi
The World Cup winner, who now plays in Japan at Vissel Kobe, was a member of Barcelona for over 20 years as he climbed from the academy to eventually achieve legendary status.