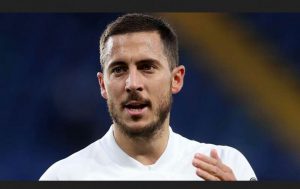 Real madrid considered offloading the Belgium international during the transfer,

Eden Hazard is determined to prove his worth to Real Madrid as he hit back at claims that he is always injured.

The Belgium star has been plagued by injuries since he arrived at the,

Due to his lack of playing time and Madrid’s desire to sign Kylian Mbappe,

Hazard was deemed a sellable asset by the Spanish giants in the summer transfer window,

and was linked to Juventus as a possible replacement for Cristiano Ronaldo.

Hazard has stayed put, however, and hopes to live up to the expectation in Madrid.

“I signed with Real Madrid for five seasons. The first two have not been good, the injuries have not helped me,

but I still have three more to prove my worth,” he said to HLN.

“I hope it works, I hope to get up one morning and feel great on the training ground.

If I feel pain there, I drag it to the games and I will continue to have it. I am waiting for that moment when I can show my worth again.

“Real Madrid have already spent a lot of money on me. I want to give something back to them.”

The 30-year-old has gained a reputation as a player who is constantly injured because of his repeated issues at Madrid.

He has been limited to just 46 appearances in all competitions since his arrival in 2019, featuring just 14 times in La Liga last season.

But he pointed out that the fitness problems are a new phenomenon for him,

as he had barely missed a game in his seven years at Chelsea.

Read Also: FA Charged Chelsea As They Failed To Control Their Players Against Liverpool

• Enderson Pen Down To Extends His Contract At Manchester City

“People think that I am always injured. That is the truth.

But if you review my career there is not a player who, for a period of 10 years, has played as many games as I have,” he said.

“I do what I have to do. I work daily with the physio. That’s what I do. Since the beginning of the season we have done a great job with the physical trainer.

“At the moment it is going well, I am feeling better, but I am not completely 100% still. I hope we continue like this.”

He added: “Sometimes it has been difficult to be injured.

You want to play and you are in the club trying, but you still have that pain. Those are the worst moments.

“Sometimes it is difficult to understand, you do everything you need to do and not even that helps… so suddenly you don’t want to do anything else.”