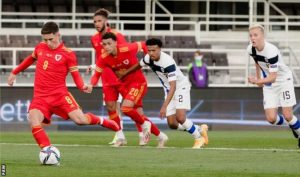 Wales side were held to a goalless friendly draw by Finland in Helsinki.

The much-changed and youthful visitors controlled the first half but squandered,

its best chance as Harry Wilson’s penalty was saved by Carljohan Eriksson.

Finland’s goalkeeper denied Wilson again after the break as he pushed away his free-kick.

Gareth Bale made a late substitute appearance and almost marked his cameo,

with a goal, but volleyed one shot over the bar and fired another straight at Eriksson.

As much as the Real Madrid forward would have enjoyed adding to his record tally of 33 goals for Wales’ men’s senior team,

the result was of no great significance to Robert Page’s men.

• Who Had A Sensational Transfer Window?

Previews of the match

This was very much a shadow Wales team, with 10 players ruled out and other key figures,

such as Bale and defender Ben Davies benched with upcoming World Cup qualifiers in mind.

Their understudies started confidently in Helsinki, keeping the ball comfortably and switching positions in a fluid 3-4-3 formation.

It was Wales’ least experienced player of all, 20-year-old Brennan Johnson, who won the,

penalty as he made his first start for his country – beating Niko Hamalainen before being fouled by the Finnish defender.

Wilson’s penalty was tame, struck low to the goalkeeper’s right and saved by debutant Eriksson with relative ease.

Finland posed more of a threat in the second half but struggled to fashion,

The hosts were instead limited to hopeful long-range shots from Fredrik Jensen,

While Wales were weakened by enforced withdrawals in Helsinki, Page chose to start,

without the likes of Bale and Davies to keep them fresh for Sunday’s World Cup qualifier against Belarus.

That game has been moved to Kazan in Russia, prompting Page to bemoan a “logistical nightmare”

which has ruled out another three of his players because of visa issues, taking the number of those unavailable to 13.

Such a strain on already limited resources is a concern for Wales before a match against,

Belarus they realistically must win to keep alive their hopes of qualifying automatically for a first World Cup since 1958.

The same is true of next Wednesday’s match against Estonia in Cardiff,

as Wales aim to put pressure on group favourites and early leaders Belgium.

Wales could have done without their deluge of withdrawals but, given how their fringe players performed against Finland, Page’s men will take some encouragement into their qualifying double-header.