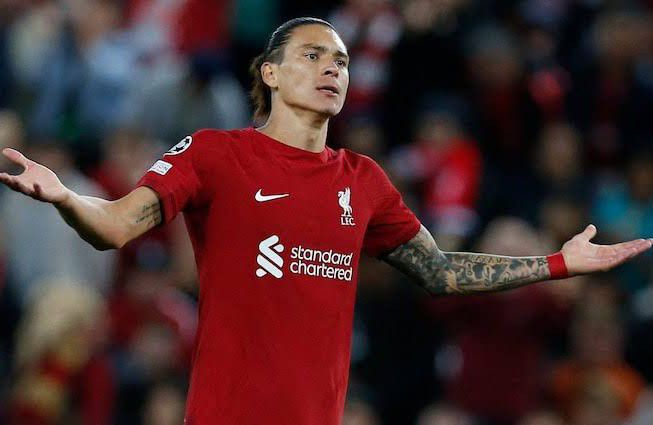 Liverpool summer signing Darwin Nunez said he is struggling to find his confidence and he ‘he doesn’t understand’ Jurgen Klopp messages.

The former Benfica striker arrived in the summer in a deal that could reach £85million but he has only netted once in the Premier League.

He missed three matches, including a 9-0 drubbing of Bournemouth, due to suspension and has been heavily out-scored by Roberto Firmino,

while he again fired blanks in a rare start against Rangers in Tuesday’s 2-0 Champions League win.

and Klopp has fielded countless questions about his record signing’s teething problems.

Now the 23-year-old himself has addressed his patchy form since moving to Anfield and suggested he is second-guessing himself,

while he also revealed that he still struggles to grasp what Klopp says and needs his team-mates to translate for him.

Speaking after the match against Rangers, Nunez was asked by ESPN Colombia about Klopp’s gameplan.

‘The truth is that, honestly, in the team talks he speaks and I don’t understand anything.

‘I then ask my team-mates to tell me what he said.

But I think he is very clear about his game.

‘He asks us to make things simple, to not be afraid to play, to have confidence.

And then when we lose the ball he wants us to press. That’s what he always asks for.’

Moving on to his own struggles to adapt at Liverpool.

‘Sometimes I feel indecisive, I don’t feel confident at all.

‘But as training sessions go by and matches [that will increase]. The coach himself always gives me confidence.

‘So do [assistant manager] Pep [Lijnders] and [elite development coach] Vitor [Matos], who speak Portuguese and always translate for me.

‘And then I have my team-mates who talk to me and tell me to be calm.

When they speak to me it calms me because I know that if I do something wrong, they’ll always have my back.’