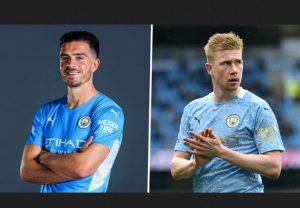 The midfielder has insisted that he needs to change games like Kevin de Bruyne at Manchester City,

while admitting to feeling pressure over his £100 million ($138m) price tag.

City broke the British transfer record to prise Grealish away from Aston Villa,

at the start of August, tying him down to a lucrative six-year contract.

The 25-year-old made his debut for Pep Guardiola’s side in their Community Shield defeat to Leicester,

and has since started all three of their Premier League fixtures at the start of the new season,

but he hasn’t been completely satisfied with his performances.

Read Also: ‘He’s Good, So To Speak’: Haaland Reaveals What He Did To Van Dijk’s During Norway vs Netherlands

“I have had games at City already where I have come off and I thought ‘I could have changed that game more,’

” grealish told ITV Sport. “That’s why they paid this amount of money for me’.

“That is what the likes of Kevin De Bruyne would do.

That is what he does; changes games and flips them on their head.

I have had games already – the Community Shield final against Leicester,

and the first game of the season against Spurs – where I felt like I could have done that.

“But since then, I have had a perfect start to my career [at City].”

Grealish believes he still has plenty of potential to unlock as he edges towards the prime years of his career,

and looks up to De Bruyne as a role model having seen the Belgian improve season after season at Etihad Stadium.

“Nowadays, especially in football, you look at players in my type of position and you are not going to hit your peak [until later years],”

“For example, you look at Kevin De Bruyne, who is 30, and he has just signed a new deal,

at City and he is probably at the height of his career now.

“It is probably the best he has ever played in the last couple of years.

I’m 25, I have got three, four, five years until I reach his age and I have got so much more,

to learn in the game and so much more to improve, and I feel like I will over the next few years, definitely.”