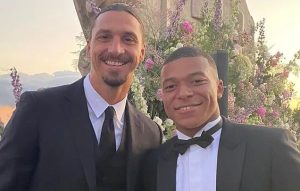 Ibrahimovic has never been afraid to speak his mind and he has told of how he once advised Kylian Mbappe to sign for Real Madrid, although he also then warned Paris Saint-Germain president Nasser Al-Khelaifi not to sell him.

The Swedish striker spent four years in Paris, but he left a year before Mbappe arrived from Monaco.

“He needs a more structured environment, like the one at Real Madrid.

“But then I told the PSG president not to sell him.”

In the interview, Ibrahimovic also touched on various other big moments in his career, such as his decision to return to Italy after a spell in MLS where he admits he considered retiring.

“After seeing a documentary about [Diego] Maradona I had decided to go to Napoli to win the Scudetto,” said Ibrahimovic.

“I was tired of the USA, I even thought of giving it all up but [Mino] Raiola told me ‘you’re crazy, you have to go back to Italy’.

He agreed everything with Napoli, but then [Aurelio] De Laurentiis sacked [Carlo] Ancelotti and everything changed.

“Then I asked Mino, ‘which is the worst team I can change?’ He replied, ‘Milan lost 5-0 in Bergamo [against Atalanta] yesterday’ and I said, ‘Decided, let’s go to Milan.”

has a CV which boasts many of the biggest names in European club football, including Barcelona, although his spell at the Camp Nou was short-lived and he believes that Pep Guardiola didn’t know what to do with him.

“Guardiola never understood me. He wanted to program everything I did,” said Ibrahimovic.