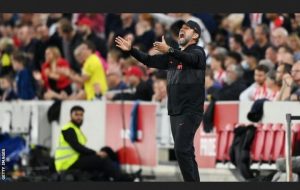 Liverpool 3-3 draw on Saturday was the first time they conceded three in a match since the European defeat by Real Madrid in April.

Liverpool came from behind to secure a 3-2 victory in their Group B opener against AC Milan.

After going 2-1 down before Mohamed Salah’s equaliser and Jordan Henderson’s 69th-minute winner.

Read Also: Lionel Messi Is Close To Be Feature For Psg Against Pep Guardiola Sides In Champions League On Tuesday’s

Before the Brentford draw Jurgen Klopp’s side had let in just one goal in five Premier League matches,

against Chelsea – after an impressive start to the season which sees them top by one point.

“We didn’t defend at our highest level so we have to improve,”

“We don’t make these things bigger than they are but you have to show a reaction.”

“It’s not a moment to be concerned but we have spoken about it and we know that we can’t do things like that.

We have sorted that and we have to show that tomorrow,”

“This is a tough group and we should not waste time.”

Thiago Alcantara and Harvey Elliott are sidelined by long-term injuries.

But, Jurgen Klopp reported no new injury concerns and said he will be taking a full squad to Porto.

Liverpool thumped the Portuguese side 6-1 on aggregate in the 2018-19 quarter-finals,

Klopp said that record “is not an advantage at all”.

Porto, who drew 0-0 against Atletico Madrid in their first Champions League group game,

reached the quarter-finals last season where they were knocked out by eventual winners Chelsea.