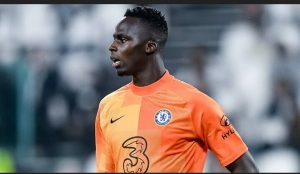 Senegal centre-back Kalidou Koulibaly has expressed his disappointment that,

His country team-mate Edouard Mendy did not get shortlisted for the Ballon d’Or.

The only goalkeeper on the 30-man shortlist is Gianluigi Donnarumma, who played a key role in Italy’s Euro 2020 victory.

Koulibaly thinks Mendy should be included after he helped Chelsea win the Champions League last season.

“It’s a real shame that Edou isn’t one of them.

He is the first African goalkeeper to win the Champions League,”

“We must continue to work and move forward.

We have to do the double [the work] of some people to be well judged.

“Edou is a very positive person. We talked about it together.

He will continue to fight to be part of it. For me, he has a place among these 30 players.”

Chelsea and Manchester City are the clubs with the most nominees (five), followed by PSG (four), Juventus, Manchester United, Inter and Real Madrid (two).

Lionel Messi, Jorginho and N’Golo Kante are expected to be the leading contenders for the award, along with Robert Lewandowski and Cristiano Ronaldo.