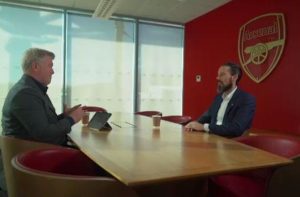 Arsenal director Josh Kroenke says the club is not for sale, despite a £1.8bn bid from Daniel Ek, and insists the current owners have big ambitions of their own to bring success back to north London.

Spotify’s Ek wrote to owner Stan Kroenke in May and made the bid, which remains on the table.

And in September, Thierry Henry – who backs Ek’s proposed takeover, along with fellow Arsenal legends Patrick Vieira and Dennis Bergkamp – told Monday Night Football there had not been a response to the offer.

“To be able to get there, you need to have someone respond on the other side,” Henry said.

“It hasn’t happened yet, but we and he is here to stay.”

Josh Kroenke, son of Stan Kroenke, insisted no bids for the club would be accepted right now.

And that there are significant plans in place to take the club forward under the current ownership.

Read Also: Cristiano Ronaldo ‘Must Be So Frustrated’ With ‘Embarrassing’ Man United Because ‘Manchester Will Be Blue For A Long Time’

“We get bids for the club all the time, from many different parties around the world and that speaks to the strength of the Arsenal.”

“It’s a wonderful institution, Arsenal Football Club is a global brand and my only response to anything is the club is not for sale, we’re just getting started.

“We’ve only really owned the club since 2018. We have a young manager, we have a young squad and we’re charting our path to the future.

“In the United States we have a certain model [used at other organisations run by Kroenke Sports & Entertainment].

And we’re implementing that here, and we have over the last three years.

Which is, young players, talented players with the right mentality.

Let them grow together while continuing to sprinkle in talent throughout the squad.

“Eventually it grows into something very special.

The power of continuity behind the scenes and people working together and pulling in the same direction is an underrated aspect of pro sports.

“With the power of continuity and allowing this group to grow together, special times are ahead for this club.”

Arsenal were the top spenders during the summer transfer window.

But they have fallen behind more wealthier rivals in recent years, with consecutive eighth-place finishes in the past two seasons.

A far cry from the run of 20 top-four finishes in a row under Arsene Wenger.

However, Kroenke insists Arsenal supporters should continue to expect their side to compete with the best in the Premier League and set out the club’s strategy to make that a reality.

“Arsenal fans should expect the best. That’s what they’ve expected throughout their history and that shouldn’t change at all.”

“Do we have to rethink how we’re going to go about achieving those goals? Absolutely.

This summer that really played out. We weren’t breaking any transfer records but the net spend was very high.

“We had many areas we needed to address on the pitch.

I think what gets left out quite a bit is, we needed to change a few mentalities around here.

We needed to get mentally stronger.

“I think from the new signings to the kids that are coming through from Hale End,

to the senior players that are setting the tone in the dressing room on a daily basis, that mentality is to go out and compete and leave it all on the pitch.

“That is a quality that can make our fans proud, win, lose or draw.