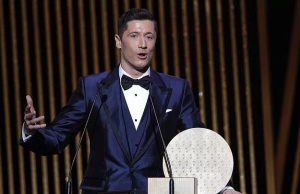 But, the Lewa has revealed his sadness at not coming out on top while also picking up on the Paris Saint-Germain forward’s words.

In the 2020/21 season, Lewandowski scored an incredible 48 goals and provided nine assists in 40 matches in all competitions.

While during this campaign he has notched up 16 Bundesliga goals in 14 games.

“I can’t say I was happy, on the contrary. I have a feeling of sadness.

To be so close, to compete with Messi, of course I respect how he plays and what he has achieved.

The Bayern Munich striker also took aim at Messi, after the PSG forward urged France Football to award the 2020 Ballon d’Or to Lewandowski.

“I’m not that enthusiastic about getting the 2020 award.”

“I would like it [Messi’s 2020 Ballon d’Or statement] to be a sincere and courteous statement from a great player and not just an empty words.”