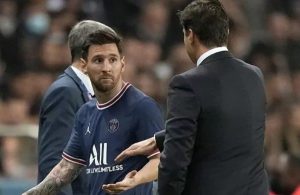 The former Tottenham coach Mauricio Pochettino is under the microscope due to the media speculation suggesting that a number of the players are at odds with the coach, who himself has also been linked with a move to Manchester United.

According to L’Equipe, there have been suggestions that Lionel Messi’s entourage has serious doubts over the tactical capabilities of Pochettino.

It’s also believed that a number of PSG’s playing squad believe that Pochettino’s style of play is restrictive.

And that there is no capacity to make good transitions when it comes to counter-attacks.

Meaning he cannot get the best out of his main attacking threats – Kylian Mbappe, Messi and Neymar

Read Also: Lewandowski: “I Would Like Messi To Be Sincere, Not Empty Words”

Pochettino’s personable nature has also been criticised, with some believing him to be too soft with players, and not reprimanding them when required.

While his treatment of Messi – allowing him to celebrate his Ballon d’Or win two days before a match – hasn’t gone down well either.

Given that, Pochettino has clarified his position and stressed that the press will not always be kind to PSG given the focus which is on the club.

“I feel good and calm, “I feel that I have the support of my players.

“We have ups and downs and I understand that being at PSG means a light is shone on the club, and not everything will be complimentary.

There are things to improve and we can play better.”

Next up for PSG is their final Champions League group stage match against Club Brugge.

Though the Ligue 1 side will finish second to Manchester City in Group A regardless of their result against the Belgians.