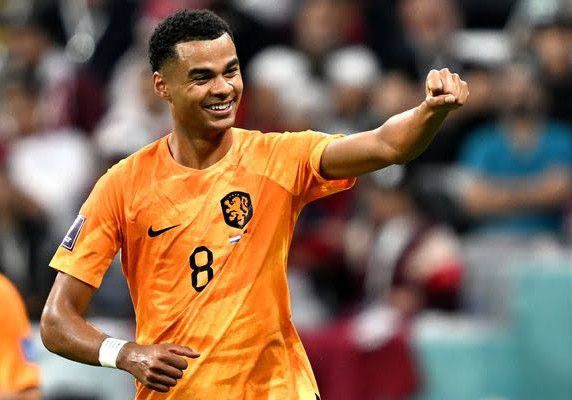 Liverpool have moved ahead Manchester United’s for Cody Gakpo agreement and are set to sign the PSV Eindhoven star.

Liverpool will pay £37million up front, rising to £50m with add-ons. and the player is set to fly to England in the next 48 hours to complete the formalities of his move.

Gakpo, 23, had an impressive World Cup in Qatar, scoring three goals as he helped the Netherlands reach the quarter-finals.

‘PSV and Liverpool have reached an agreement on the proposed transfer of Cody Gakpo.’

‘The 23-year-old attacker will leave for England imminently where he will be subjected to the necessary formalities ahead of the completion of the transfer.’

‘It is wonderful how he has showcased himself.

I enjoyed watching him [at the World Cup], he deserves this because of how he has behaved, how he has continued to work and perform.

‘I was able to help him from very close by and that makes me proud. I’ll give him his path when it comes.’

Securing a top four place remains the priority for Klopp and Liverpool this season following an uncharacteristically sluggish start to the campaign.

Gakpo has been in fine form this season, scoring nine goals and providing 12 assists in 14 league games for PSV.