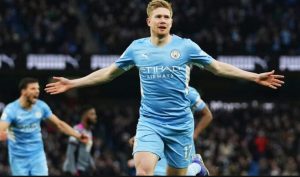 Manchester City held off an unlikely Leicester comeback to clinch a ninth successive Premier League win in thrilling style and move six points clear at the top of the table.

It looked like the defending champions had wrapped up the points by half-time as they led a depleted Foxes side 4-0, with a penalty apiece by Riyad Mahrez and Raheem Sterling on top of strikes by Kevin de Bruyne and Ilkay Gundogan.

Read Also: Why 2021 Was The Best Year Of Karim Benzema’s Career So Far

Leicester had other ideas, however, with three goals in the space of 10 second-half minutes from James Maddison, Ademola Lookman and Kelechi Iheanacho giving them hope.

A header by Aymeric Laporte restored order and gave the home side much-needed breathing space, before Sterling’s second made sure of the points late on, but what had started out as a walk in the park will be remembered as a much sterner test for the league leaders.