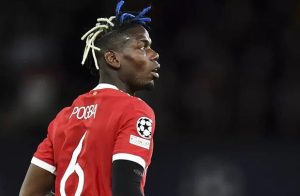 Manchester United are seemingly unwilling to renew Paul Pogba’s contract, one which is set to expire next June. The Reds Devils are not contemplating offering the Frenchman a new deal, at least not for the time being.

Paul Pogba has not lived up to expectations following his 105 million euro move from Juventus back in 2016 and he is currently earning 12m euros per season.

The relationship between the two parties has not been ideal in the last few months.

As the French midfielder has failed to rediscover his form at the Red Devils.

Pogba received a direct red card in Manchester United’s 5-0 thrashing at the hands of Liverpool after coming off the bench.

He was handed a three-game ban, before picking up an injury while on international duty, with the Red Devils now expecting him to be sidelined until 2022.

Juventus, Paris Saint-Germain and Real Madrid seem to be the main suitors to acquire the player’s services next summer, with Pogba free to sign a pre-contract agreement with another club from January 1, 2022.

Real Madrid president Florentino Perez has told his club’s board that Los Blancos should set their sights on free agents due to the financial struggles of the club following the COVID-19 outbreak.