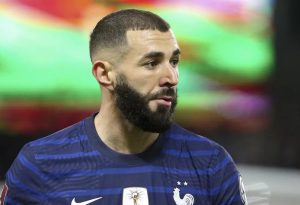 The winners of the 2021 Ballon d’Or awards are set to be announced on November 29 in Paris. Meanwhile Karim Benzema is backed by many fellow sportsmen to win it. Thierry Henry, Zinedine Zidane and Rafael Nadal all think the Real Madrid forward deserves the prize.

Karim Benzema hopes he will win the Ballon d’Or when the awarded is handed out on November 29th.

Lionel Messi, Robert Lewandowski and Jorginho are just some of the frontrunners for world football’s most prestigious individual award.

But the Real Madrid forward also has a good chance of winning the trophy for the first time in his career.

Last year he was the second highest scorer in La Liga.

Benzema scored 30 goals for the club last season, his joint-highest haul, and has 293 goals for the side since his arrival in 2009.

The France international says he is happy to be in contention.

Benzema said after France’s 2-0 win over Finland in World Cup qualifying on Tuesday.

“The Ballon d’Or? We’ll see what happens… but I hope so,”

“I’m happy to be involved, to feature and score in the games. I’m so happy and I hope this can continue.

In any case, the World Cup should be one of our targets given the team we have.

“We have to prepare well to reach our goals and the World Cup is one of them, for sure.”

Thierry Henry has backed his compatriot to pick up the award.

“Let’s be realistic, I hope it can be him [Benzema] or N’Golo Kante.”

“We are talking about a player who deserves to win this Ballon d’Or,” he told Telefoot.

“He’s an incredible player, I had the great honour of coaching him.

He associates easily with others. He knows how to do everything in the field. I hope he can be rewarded with this Ballon d’Or.”

“My admiration as a player, the commitment to sport and professionalism at his age. Good luck and my support for the 2021 golden ball, Benzema.”