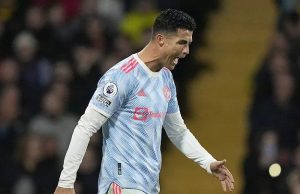 Solskjaer’s dismissal was not a surprise on Sunday morning, with the 4-1 defeat to Watford the previous afternoon being the undoubted low-point of the Norwegian’s tenure, yet Manchester United now have a short window to convince players to stay at the club.

A club statement has already confirmed that the club will seek to hire an interim coach until the end of the season, even if Monday has seen a lot of stories regarding Mauricio Pochettino.

Whilst the immediate focus is not on finding a new coach, there is the very real concern amongst fans that United are writing off the current season with over half of it left.

Who are United at risk of losing?

In terms of players who are a contractual risk for the club.

There are a number of first-team talents who could walk away from the club for nothing in the summer.

Jesse Lingard, Paul Pogba and Edinson Cavani all have contracts which run until June of 2022.

As soon as January arrives they can talk to foreign clubs about a free transfer.

Cavani isn’t expected to stay and United aren’t overly concerned about that due to his high salary and the fact Cristiano Ronaldo has taken the role the Uruguayan held last term.

Lingard is of a concern to the club because he is a home-grown player.

And the fact that not selling him last summer when West Ham United were interested in paying 30m pounds seems idiotic now.

But he isn’t actually at the level to contribute to a good Manchester United team.

Pogba is the biggest name in this list, although his reputation and branding potential is worth far more to United than his contributions on the pitch.

No club wants to pay for Pogba, with his limitations having been highlighted completely since he returned to Old Trafford, but if he is a free transfer then there will be clubs interested.

In giving up on the current season, United have gone from pre-season expectations of putting a title challenge forward to merely hoping to clinch Champions League qualification.

With the list of interim options as inspiring as a punch in the stomach, United fans will be concerned that a top-four finish may even be beyond them after such a poor recent run.

Now, this is where United’s board may have made a mistake.

Cristiano Ronaldo will not play in the Europa League, it just won’t happen.

If United slip into the competition again, then Ronaldo would be incredibly unlikely to stay beyond a sole year back in Manchester.

Now, some may argue this is better for the team’s development, but the reality is that United would lose football’s most marketable star, and the Glazer family don’t like that.

This may well be why attempts have been made to coax Pochettino out of PSG early.

But the fact remains that United need to show immediate improvement on the pitch, otherwise their squad will look wholly different next term.