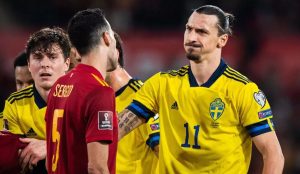 The Sweden star and currently AC Milan striker – caused a stir recently when he was booked for violently knocking down Cesar Azpilicueta off the ball in Sweden’s World Cup qualifier against Spain.

Zlatan Ibrahimovic has slammed Cesar Azpilicueta after barging him to the ground in Sweden’s World Cup qualifier against Spain and says he would do it again if he felt he needed to.

The 40-year-old sent social media into a frenzy when he clattered into the back of the Chelsea defender at a set-piece.

Ibrahimovic was booked in the 1-0 defeat which means he will miss his nation’s first World Cup play-off match.

Azpilicueta took to Twitter after the incident and posted a picture with the caption “all good over here”.

Ibrahimovic says he was simply defending a team-mate and that Azpilicueta would not have the courage to confront him if they were to meet again.

“The other day in the national team, I gave a tackle to [Spain’s Azpilicueta].”

“I did it on purpose. I’m not ashamed to say it because he did something stupid to my player.

You don’t have balls to do it against me. But I will show you what happens if you do it to me.’ That’s why I did it.

Ibrahimovic scored twice and set up an assist in AC Milan’s 4-3 defeat to Fiorentina in Serie A on Saturday and now has 120 caps for Sweden.

He says he is still motivated to carry on performing at the highest level of men’s football.

“I will keep doing it as long as I can. I don’t want to have that regret if I stop and then, in a couple of years, I’m sitting with you and saying: ‘I could have continued because I was feeling good.’

“It’s better to be totally finished and say: ‘I cannot do it any more.’ But I can still do it and I am doing it.”