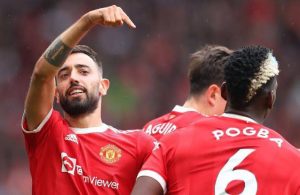 It’s party time at Old Trafford. It’s Fred for this one, and Pogba is involved yet again. I count that as his fourth assist of the match!

It was 6-2 in this fixture last season
We’re not far off that score now. Manchester United are looking like they can score on every attack.

Bruno Fernandes bags a hat-trick! It’s his first for Manchester United. Magical start for his season.

Bruno Fernandes again! Absolute quality in the final third from Manchester United this afternoon. It’s given by hawk-ye after Luke Ayling tried to clear it off the line.

OR WATCH FOOTBALL VIDEO BELOW