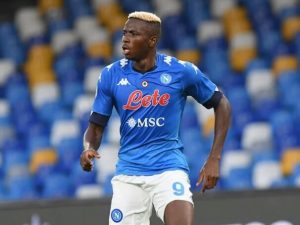 Formal Napoli captain, Francesco Montervino, is confident that the club’s record signing, Victor Osimhen, possess the requisite qualities to lead the Serie A side’s attack following his impressive form during the pre-season.

Napoli under Genarro Gattuso paid over €80m to Lille for Nigerian striker in the summer of 2020.

The 22-year-old however struggled in his first season with the club owing to health issues and injuries but still managed to score 10 goals as the Partenopei finished fifth in the league behind champions Inter Milan, AC Milan, Atalanta, and Juventus.

Osimhen has however given the club’s fans something to look forward to ahead of the 2021/22 season following his impressive performance as he found the back of the net on seven occasions in four pre-season games, including a brilliant brace in the 3-0 defeat of Bayern Munich.

“Osimhen is the centre forward and is the attacking terminal of Napoli, whatever the role.

He always position himself to score, to attack the depth, give the depth and stay in the area.”

“Surely the extra mezzala (half-winger) can change something, but I saw an Osimhen who wants to score, as soon as he sees the chance, he race towards the goal directly.”