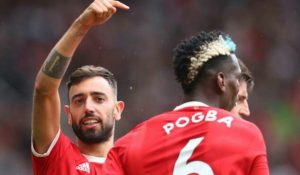 This was a matchday that for some had been 17 months in the making.

And for those Manchester United fans who haven’t been inside Old Trafford since Scott McTominay scored a screamer against Manchester City in March 2019, it proved a game worth waiting for, as Ole Gunnar Solskjaer’s side disposed of bitter rivals Leeds 5-1.
Solskjaer said he had never heard Old Trafford as loud as it was for that Manchester derby, but he might have to revise that statement now.

Paul Pogba and Bruno Fernandes combined for a masterclass of devastating attacking football that left Leeds on the end of a big defeat at Old Trafford for the second season running.
The tone for a joyous afternoon for the home fans was set before the game even got under way when Raphael Varane was finally unveiled as a Manchester United player.
The £40 million ($50m) man came out holding his No.19 aloft to only add to the excitement of those already delighted just to be back in the ‘Theatre of Dreams’.
Paul Pogba was particularly impressive. Indeed, on this form, he is simply unplayable.

One, two, three, four: the assists kept racking up for the Frenchman as his defence-splitting passes left the Leeds backline in pieces.

“People talk about the quality of Paul, but his quality is not in discussion. We know what he can do and today he showed that.

“He’s an important player for us. We know to expect these kind of performances from Paul.”

They weren’t the only players to impress, of course. As Solskjaer was at pains to point out, Greenwood also staked his claim for a regular starting spot.

He looked bright all afternoon and his finish from a sublime Pogba through-ball was both confident and clinical. “He’s become a man,” Solskjaer enthused in his post-match interview.
By then, the supporters had even got their first glimpse of summer signing Jadon Sancho in a United shirt, with the winger looking lively during his late cameo appearance.

The expectation is that both he and Varane will have a transformative effect on this improving and already impressive United team.