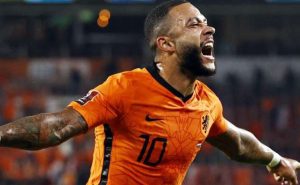 The Barcelona forward has now above Wesley Sneijder and level with the,

as the star attacker scored his first hat-trick for his country on Tuesday.

Depay struck three times and set up another in the Oranje’s 6-1 home win against Turkey.

The Barcelona player now has 33 goals to his name for his country from 71 appearances.

Depay’s impressive display in the World Cup qualifying match saw him break into the,

top 10 in his country’s list of all-time top scorers.

He pulled level with Wesley Sneijder with his first goal before surpassing,

the former captain with his second in the first half.

Depay then knocked the ball over the line in the second period to move him up to joint-eighth in the list.

He is now level with football icon Cruyff and Abe Lenstra,

But while Depay has 71 caps to his name, Cruyff managed to net 33 goals for the,

Oranje in just 47 matches, helping them reach the 1974 World Cup final along the way.

The 27-year-old has been in spectacular form for Netherlands over the last year,

smashing in 14 goals in his last 14 appearances.

He is off to a good start at new club Barcelona, too.

Depay has scored two and assisted one as the Camp Nou side have taken seven points from their first three matches in La Liga.