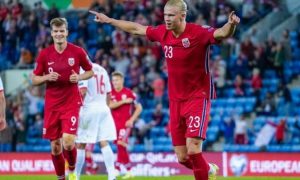 Kristian Thorstvedt opened the show with a goal and then provided the assist for Haaland to make it 2-0.

Haaland then got his second before Reece Styche’s lob made it 3-1.

Alexander Sorloth pounced on a loose ball to restore Norway’s three-goal lead in the second half and Haaland tapped in his third in injury time.

so far this season and has already scored two hat-tricks, having got one in his first game,

of the campaign in a 3-0 win against Wehen Wiesbaden in the German Cup.