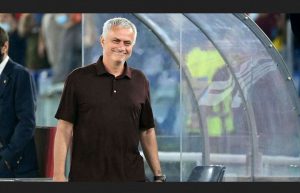 Read Also: ‘I Have To Manage His Minutes’ Solskjaer Says Cristiano Ronaldo Won’t Be Included In Every Man Utd Game

Mourinho explains to DAZN after the match

“It was a match with a special number for me.

And, I always wanted to remember a match like this for my 1000th game. I lied to everyone!

“It could have ended 6 to 6, 7 to 7, (Roma goalkeeper) Rui Patricio came up with two miracles, we missed a few goals.

It was a child’s race, I apologized to [Sassuolo head coach Alessio] Dionisi, they played a fantastic game.”

Mourinho has managed an encouraging start to life back in Italy.

Winning all of his first five games with Roma in all competitions.

With three wins from three Serie A matches, Roma sit top of the table, level on points with Napoli and AC Milan.