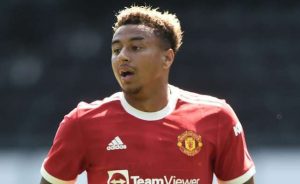 Jesse Lingard should have “flown the nest” after his loan spell at West Ham says Gary Neville,

who has admitted he is “disappointed” the Manchester United star didn’t leave in the summer transfer window.

Lingard was sent out on loan to West Ham in January after falling down the squad,

pecking order at Old Trafford under Ole Gunnar Solskjaer, with Bruno Fernandes, Paul Pogba, Fred and Scott McTominay all ahead of him.

A change of scenery gave Lingard a new lease of life as he rediscovered his best form,

to inspire the Hammers to a sixth-placed Premier League finish.

But, they were unable to sign the 28-year-old outright and he is now back on the fringes in Manchester.

Neville feels Lingard is one of a handful of United players who should have followed,

Daniel James in seeking a permanent move, with the winger joining Leeds in a £25 million ($34m) deal on deadline day.

“I would actually have thought that a couple more players at Manchester United [would have left].

“He’ll get a few games, he’ll get moments on the pitch, he’ll contribute, but I think he had,

something going at West Ham last year that meant Jesse Lingard in his own right was standing up as a really good player.

“To go back to being a squad player again I think, for me, is disappointing.

I think you sometimes have to sort of fly the nest and go.

I thought he’d already done that with what he did last year.

“So I think there’s two or three players that won’t get a lot of game time this year,

that could have joined Dan James and really furthered their careers and got more football.”

Neville went on to predict James will fit into Marcelo Bielsa’s set-up at Leeds perfectly,

and doesn’t see the move as a backwards step for a man who found himself in and out of Solskjaer’s line-up at United.

I think this is one of those where it’s a win-win, there’s no sadness for me in Dan James leaving,

because I think he came to United, he always did his very best, he was a massive threat on the counter-attack,” he said.

“Manchester United have got a lot of players in those types of areas and I think it’s really,

important for young players to go and play.

Leeds have always wanted him, they wanted him first time around when Manchester United got him.

“He’ll suit the way in which Leeds play.

You think of the way Leeds play on the counter-attack with such speed,

one-on-ones all over the pitch, he’ll love it there.

“The crowd there is a big crowd, they’re a club who demand a lot as well, so I think,