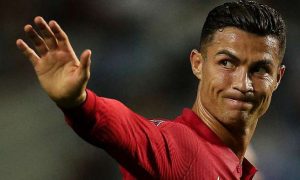 Portuguese forward flashed a thumbs up as he moved away from the TV camera after answering a few questions.

Cristiano Ronaldo walked off camera during a post-match interview,

following his record-breaking international goal for Portugal on Wednesday.

His second-half equaliser against the Republic of Ireland made him the all-time leading men’s scorer,

at 110 career goals, and he brought his tally to 111 in stoppage time to give Portugal a 2-1 win in World Cup qualifying.

Ronaldo was not interested in spending much time with the media afterwards,

choosing instead to celebrate away from his interview.

“I’m very happy, not only because I beat the record but also for the special moments,

that we had, two goals at the end of the game,” Ronaldo according to Sky Sports.

Sometimes you score, sometimes you [make a] mistake. But I still believed until the end of the game.”

He didn’t have patience for another question to be asked, shuffling off camera as the reporter attempted to continue the interview.