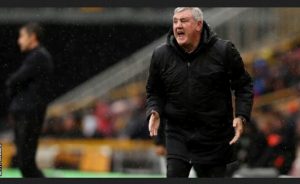 Newcastle United have taken the unusual step of confirming that manager Steve Bruce will remain in charge of the club for their weekend game against Tottenham.

New part-owner Amanda Staveley said the club wanted to be “patient and considered” in their approach and that “change doesn’t happen overnight”.

Staveley said Bruce, who will celebrate his 1,000th game as a manager, will be the “first to know” if things change.

Newcastle are winless this season and second bottom in the league.

A Saudi Arabian-backed takeover of the club was completed last week, bringing to an end Mike Ashley’s 14-year spell as Magpies owner.

Bruce has come under increasing pressure in recent weeks and a large proportion of fans want the 60-year-old to leave the club.

Read Also: Mbappe Could Change His Mind And Stay At PSG: Says Pochettino.

“We have had an extremely busy week reviewing the business and getting to know people and it is imperative that we continue to be patient and considered in our approach.

“Change does not always happen overnight, it demands time and that we follow a carefully considered plan and strategy.

“We met Steve and the players on Monday and have given them the time and space this week to focus on preparing for what is a very important game on Sunday.

“Steve has been very professional in our dealings with him and he and his coaching team will take the team on Sunday.

“If we make any changes going forward, Steve will be the first to know.

But, in the meantime, we wish him the best of luck in his 1,000th match as a manager and will be joining you [the fans] in getting right behind the team.”

Bruce, who is a boyhood Newcastle fan, was appointed Magpies head coach on a three-year contract in 2019 following his resignation as boss of Sheffield Wednesday.

His arrival was greeted with mixed reviews by supporters after former manager Rafael Benitez made a positive impact in the north east.

The club have lost four games and drawn three in the league this campaign and were knocked out of the Carabao Cup on penalties by Burnley.

Bruce is due to speak to the media on Friday afternoon before Spurs’ visit at the weekend.