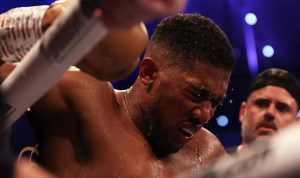 The former WBA, WBO and IBF heavyweight title holder, Anthony Joshua is determined to regain his titles and has promised to learn from his recent defeat.

and says he is ‘done with losing’ as he prepares for a potential rematch.

The 32-year-old lost the WBA, WBO and IBF heavyweight titles after suffering only his second career defeat, to Usyk in September.

But the boxer is determined to bounce back, declaring ‘war’ on his opponent.

“[Usyk] might get thrown on the floor in the next fight because this is war.”

“I’m heading into my 12th world title fight now and the learning is done.

Joshua has spent time in the United States since losing his titles.y

And while he says he will not split with long-time coach Rob McCracken, he is seeking other inputs into his game.

“I need a new coach to learn from as well,”

“I will not be basing myself in the States, I am a UK resident.

So I am not going out to the States to find a new coach.

“Rob’s in Lithuania so I need to find a new coach for certain points as I train 10 or 11 months a year.

I need to step away and get some new teachings from trainers who have trained the likes of 13 or 14 world champions.

“I WISH I HAD DONE THESE THINGS SOONER, BUT NOW I CAN GO OUT THERE AND ADD THINGS TO MY GAME.”

Defeat has put on hold any talks of a clash with fellow countryman and WBC belt holder,

Tyson Fury in the near future, a fight yearned for by fans that has been years in the making.