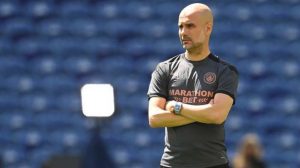 Pep Guardiola has hinted he is likely to leave Manchester City at the end of his current contract, which runs out in 2023.

The Catalan coach signed a two-year contract extension in November 2020 which,

will mean he will have been with the Premier League club for seven years, more than anywhere during his coaching career.

Read Also: All You Need To Know About Champions League Draw: Who Has Qualified?

“The next step will be a national team, there is a possibility.

International football is the next step,”

“I would need a break after seven years [at City], I need to stop and look around,

learn from other coaches, and I might take that road.

I would like to coach in a European Championship, a Copa America, a World Cup.”

Asked about the possibility of taking charge of Brazil, he added:

“They are a fantastic team. I’ve already worked with some of their players, and competed against others.

A fantastic national team, Brazil is always a strong candidate or the favourite [for trophies]. Always has been and always will be.”

Guardiola was previously in charge at Barcelona for four seasons and Bayern for three,

but, has always maintained that he cannot see himself staying in one job for too long.

He took a one-year sabbatical in New York between Barca and Bayern but moved straight to Manchester from Germany and,

has enjoyed an unprecedented period of success with three Premier League titles in five years, although the Champions League remains out of his grasp.

The former Barca midfielder won 47 caps for Spain but he is unlikely to manage the country because of his pride at being at Catalonian.

His former assistant Domenec Torrent has said that he would consider coaching Brazil in the future,

and, he has helped the careers of Ederson, Fernandinho and Gabriel Jesus at Etihad Stadium.

Guardiola has also enjoyed his time in England.