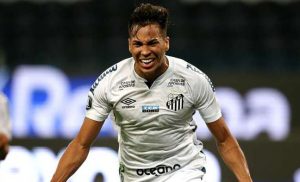 The Brazilian reveal how he  received advice from the five-time Ballon d’Or winner after linking up with the Bianconeri.

insisting that the striker has “always been an inspiration”.

Kaio joined Juve from Santos in a €3 million deal last week, with the 19-year-old committing to a five-year contract at the Allianz Stadium.

He will now have the chance to link up with some of the world’s best players, most notably five-time Ballon d’Or winner Ronaldo,

who he says has already been helping him to settle in behind the scenes in Turin.

Read Also: Any Further New Arrivals At Old Trafford Would Be A “Bonus” Says Solskjaer

Kaio has told the club’s official media channel: “Juve is a dream for me.

It will be important to adapt well, my team-mates are helping me a lot and Cristiano has given me lots of advice too.

“Cristiano has always been an inspiration to me. I hope to learn a lot from him, he’s a fantastic person.”

The Brazilian forward added on inheriting the coveted No.21 jersey at Juve:

“I chose the number 21 shirt because many great Juventus have worn this number, such as [Andrea] Pirlo, [Zinedine] Zidane, [Paulo] Dybala and [Gonzalo] Higuain.”

Pressed on his first impressions of his new club, Kaio responded:

“I’ve been impressed with everything about Juve: from the structures, to the people who welcomed me very well, with a great desire to work hard.

“I came here to have a great season, to enjoy it and learn as much as possible from these great players.

I want to fight to score as many goals as possible.”

When could Kaio make his debut?

Juventus are due back in Serie A action at home to Empoli on Saturday,

but Kaio is unlikely to take part in that fixture after picking up a thigh injury in training.

It had originally been reported that the teenager could be out of action for up to a month,

but he has moved to reassure fans that the issue is not a serious one.

“The injury that I suffered on Monday isn’t serious, I’ll be back soon!” said Kaio.

Assuming his recovery runs smoothy, the former Santos starlet could be available,

when Juve take in a trip to Napoli in their first game after the international break on September 12.

Whether or not Ronaldo will still be a Juve player when Kaio makes his debut is something of a mystery,

with speculation raging over the 36-year-old’s future ahead of the August 31 transfer deadline.

Bianconeri officials have publicly insisted that Ronaldo will be staying,

but it has been reported that he is pushing for a move amid links with Paris Saint-Germain and Manchester City.