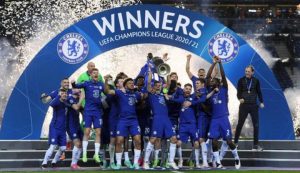 The draw for this year’s competition takes place on Thursday at 17:00 BST in Istanbul,

with defending champions Chelsea among the teams waiting to find out who they will face in the group stage.

Fellow Premier League sides Manchester City, who were last year’s beaten finalists, Manchester United and Liverpool are all in the pot too.

Here’s everything you need to know about the draw.

Who is in the draw?

There are 26 teams that have qualified for the group stage automatically, with a further six sides progressing via the play-offs.

Spain have five qualifiers, four through their finish in La Liga plus Villarreal after winning the Europa League.

What are the seeding pots?

Teams will be split into four seeding pots, with pot one containing the holders Chelsea and Europa League winners Villarreal.

The remaining pot one teams are made up of the champions from the six highest-ranked nations;

Pots two, three and four will be determined by Uefa’s club coefficient.

How does the draw work?

At this stage, no sides from their own association can be drawn against each other.

For example, Manchester City will avoid a meeting with rivals Manchester United.

If associations have two representatives, such as Lille and PSG from France,

those teams will be paired so that their matches can be split between Tuesday and Wednesday.

If associations have four or more representatives, which is the case for Spain, England, Germany and Italy, then two pairings will be made.

The 32 teams will be put into eight groups of four.

When will the group matches take place?

How does the competition work?

The top two teams from each group will advance to the last-16 knockout stage.

This year’s Champions League final takes place at the St Petersburg Stadium in Russia on Saturday, 28 May.

When is the Europa League draw?

The draw for Uefa’s secondary club competition, the Europa League, will take place on Friday at 12:00 BST in Istanbul.

The competition has been reduced from 48 to 32 teams this year.

And teams will be divided into four pots depending on their club coefficient and drawn into eight groups of four.

No sides from their own association can be drawn against each other.

This season’s final will take place in Seville, Spain on Wednesday, 18 May.

Also Read: Any Further New Arrivals At Old Trafford Would Be A “Bonus” Says Solskjaer

When is the Europa Conference League draw?

Uefa has introduced a third club competition starting this season.

The Europa Conference League, and the draw for that will also take place on Friday at 12:30 BST in Istanbul.

Like the Champions League and revamped Europa League, this competition will feature 32 teams,

and similarly teams will be divided into four pots depending on their club coefficient and drawn into eight groups of four.

Once more, no sides from their own association can be drawn against each other.

Group stage matches will take place on Thursday nights, the same night as the Europa League.

The first final will take place in Tirana, Albania on Wednesday, 25 May.