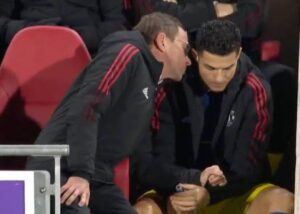 The Portuguese star has not scored in his last five appearances which is his worst goalless streak since 2013.

He also missed a penalty during United’s FA Cup defeat to Middlesbrough, underling his run of poor form in recent games.

Manchester United’s 1-1 draw with Burnley on Tuesday, leaves them one point away from a Champions League spot in sixth,

although two of their main rivals Arsenal and Tottenham have games in hand.

“It’s not only about Cristiano Ronaldo.”

“I think we are creating enough chances and enough opportunities in the last couple of games,

but we just didn’t score enough goals, but this is not only an issue with Cristiano,

it’s an issue with the other players, especially the offensive players. We don’t score enough goals.”

Southampton are next up for United in the Premier League on Saturday, a team which Rangnick is weary of.

“We are fully aware this will be a difficult one.”

“Obviously, I watched the game at Spurs during the week and they really deserved to win.

“They tactically played at a very high level and this will be a challenge for us, but I’m sure we’ll be up for that challenge.”