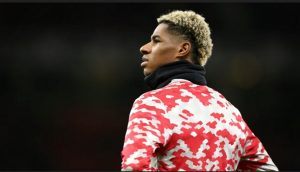 Manchester United forward Marcus Rashford has insisted he is ‘not sulking’ over recent results and performances and has vowed to prove his worth to the club he loves.

The Red devil’s have only won five of their last 14 Premier League games in a dreadful run stretching back to September.

Ole Gunnar Solskjaer lost his job in November as a result, while the team has also struggled to impress under new interim boss Ralf Rangnick.

Rashford himself is yet to rediscover his best form since returning to action from summer shoulder surgery and hasn’t scored in any competition since October.

Fan frustration in recent weeks has turned on the players.

With reports of low morale and disillusioned players, Fred has already publicly responded to insist that some of the things said are not true.

Rashford, having been criticised for his public silence, has also now spoken out.

“I read something earlier that said I’d been quiet on [Twitter] but what can I say that will make this better other than showing you all on the pitch?”

“I have endless respect for both and I’m looking forward to bettering my game under the staff at Manchester United.

I’m not sulking, I’m not unhappy, am I disappointed in some of my recent performances? Of course I am. I’m my own biggest critic.

“It’s been a tough start but I’m determined to prove my worth.

My dedication and my desire to be here should never have been in question. I love this club.”

United are next in action on Monday night when they host Aston Villa in the FA Cup third round.