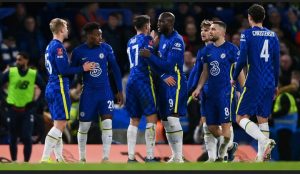 Chelsea got their FA Cup campaign off to a routine start on Saturday evening, avoiding a giant-killing on a day full of shocks with a comfortable 5-1 victory over non-league Chesterfield.

in which they face Tottenham in the second leg of their Carabao Cup semi-final tie as well as Manchester City in the Premier League.

Tuchel‘s men waited a whole 18 minutes more before making it 4-0,

when Christensen picked his spot with an audacious and nonchalant lobbed header into the bottom corner after Hall saw his long-range effort parries by Loach.

The Spireites’ sloppiness reared its head once more within ten minutes of the restart,

when Calvin Miller clumsily brought Christian Pulisic down in the penalty area.

Ziyech stepped up and thrashed the ball home to give his side a five-goal lead.

Chelsea might have celebrated a sixth goal 15 minutes from time, although substitute Kai Havertz’s tap in was brought back as Werner strayed offside before teeing up his compatriot.

Marcus Bettinelli (GK) – 6/10 – Unlucky to concede on his Chelsea debut.

Andreas Christensen (CB) – 8/10 – Calm presence at the back and did well to keep his cool as he looped his header over Loach for his side’s fourth.

Malang Sarr (CB) – 7/10 – Didn’t have all that much to do but did everything right, covering firmly and positioning himself well to deal with long balls throughout.

Hakim Ziyech (RWB) – 8/10 – A real menace when arriving into the final third, twisting and turning to provide a continuous threat to the Chesterfield back line. Eventually got a deserved goal via the penalty spot.

Mateo Kovacic (CM) – 8/10 – Absolutely dominant in the centre of the pitch, showing fantastic dynamism and thrust throughout – epitomised by his early driving run through the opposition’s lines to create the chance for the opener. Given a rest in the second half.

Callum Hudson-Odoi (LWB) – 8/10 – Tricky and pacey on the left wing, proving unmanageable for his non-league opposition. Beautiful finish to make it 2-0, deservedly walking off the pitch to a standing ovation.

Christian Pulisic (RW) – 7/10 – Floated around pretty freely and livened up in the second half, winning the penalty that made it 5-0.

Romelu Lukaku (ST) – 7/10 – Great physicality and movement in the final third, holding the ball up and linking things together as well as deservedly grabbing his side’s third. Probably should have scored many more before coming off at half time, though.

Timo Werner (LW) – 7/10 – In the right place at the right time to break the deadlock although should have really been a far more threatening presence for the entirety of the Cup tie.

Kai Havertz (ST) – 6/10 – Simply glided effortlessly on the turf, showing the vast difference in quality between the two sides.

Ruben Loftus-Cheek (CM) – 7/10 – Combative at the heart of the side, while also carrying the ball forward in typically dynamic, stylish and creative fashion.

Lewis Baker (CB) – 6/10 – Remember him? Still a Chelsea player and was finally given his second Blues appearance eight years after his first. Looked calm, although probably could have done better to prevent the consolation.

Harvey Vale (RW) – 6/10 – Couldn’t use his 30-minute cameo to really display the undeniable quality and potential he possesses.

Ross Barkley (CM) – 6/10 – Nearly found the top corner from range just seconds after being introduced, although didn’t really do all that much thereafter.