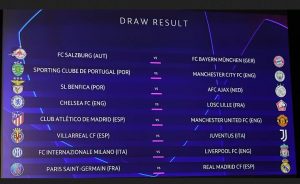 After originally making a mistake in the original Champions League last-16 draw, UEFA had to redo the draw.

The eight fixtures have now been decided for the next stage of the Champions League after a lot of confusion, with only Chelsea vs Lille having the same outcome as the original draw.

The standout fixture in the second, revised draw looks to be Paris Saint-Germain vs Real Madrid, with many different underlying storylines ready to be played out in the match.

Lionel Messi may be the name on the lips for many as he returns to Spain to face his former rivals, Real Madrid.

However, his teammate Kylian Mbappe is subject to the excitement of this match.

Real Madrid have made no hiding of their admiration for the French forward after nearly signing him in the summer of 2021.

By the time that this game is played, there is the possibility that Mbappe will have signed a pre-contract agreement with Los Blancos to join them in the summer of 2022 after his PSG contract runs out.

Sergio Ramos and Angel Di Maria will be returning to the Estadio Santiago Bernabeu to face their old club, with plenty at stake if PSG are to remain on track to win their first-ever Champions League title.

Another player that will be returning to Spain in the last 16 is Manchester United forward Cristiano Ronaldo, who will face his former rivals in Atletico Madrid.

The Portuguese player gained hero-like status during his time at Real Madrid, as he helped them win four Champions League trophies, with two of those coming after beating Atletico in the 2014 and 2016 finals.