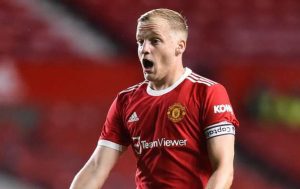 he is concerned the arrival of Cristiano Ronaldo will push his client further down the pecking order at Old Trafford.

Ronaldo caused a stir around the globe when he chose to return to United,

for a second spell following three seasons with Juventus.

But it appears that not everybody is overjoyed to see the 36-year-old back at the club,

as Van de Beek could see his playing time reduced further despite receiving assurances he would feature in 2021-22.

Read Also: Lukaku Marks His 100 Cap With A Styles

“Cristiano arrived on Friday which we knew was bad news for us.

Pogba plays on the left, and with Cristiano’s arrival it means another extra player in midfield, with Pogba moving away from the left,”

“We had conversations with Solskjaer and the board.

We took the initiative to find a club and our search ended up at Everton.

We opened talks with Marcel Brands and Farhad Moshiri.

“On Monday night [before deadline day] we received a call from Solskjaer and the club,

who told us that a transfer was out of question and that he had to report himself to training the next morning.”

Despite those fears, Albers is confident that his client will have the opportunity to shine.

Donny went to England to play in the Premier League,”

“The way the conversation went this time [with Solskjaer] compared to last summer,

things are much more clear now.

I have full expectations that Donny will get his chance now.

He only had seven days off. The rest of the summer he trained to become top fit.

He is totally ready.”