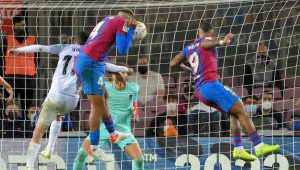 Araujo powered home a header from a Gavi cross on 90 minutes to snatch a point for Barca.

Centre-back Araujo – playing as a makeshift striker – found the net right at the end of a half Barca dominated.

Granada had led from the second minute through Domingos Duarte’s header.

Read Also: Thiago Alcantara Rules Out At Least Two Games As Liverpool Give Update On Alexander-Arnold

And they will be disappointed not to have picked up a first win of the season – and,

second victory in two seasons at the Nou Camp – after dealing so well with the home side’s aerial bombardment.