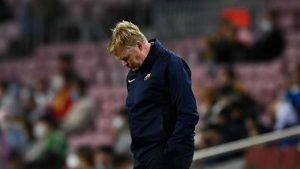 The Dutch manager Koeman is under pressure, with Barca’s president Joan Laporta seemingly doubting in public whether the Dutch playing legend deserves a new contract, which expires next summer.

Koeman says  he does not want to answer any questions concerning his future at Barcelona.

“I don’t answer anymore questions about the future, I cannot win that [discussion],”

My side suffered without “eight, nine players”.

They were without through injury, and substitute Gerard Pique was even deployed,

as an emergency striker with 15 minutes left to play.

“We lose two points, we play at home and we need to win,” he said.

Read Also: Ronald Araujo Scored A 90th-Minute Equaliser To Salvage A Point For Barcelona Against Granada

“Before the game you think about winning, especially at home.

But our bad start made the game difficult for us. We didn’t come in strong, it was our fault.

“We did not create a lot because there was not that space to play short.

And finally we play with more people in front with crosses, we scored one,

we missed in that situation a big opportunity to win the game.

After four games played this season, Barca sit seventh in the table with one game in hand.

Five points behind rivals Real Madrid, Koeman’s side next go to Cadiz, ahead of hosting Levante.