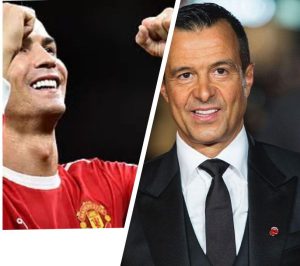 The Portugal star’s agent declared the 36-year-old is ‘very happy’ at Old Trafford in his second spell despite the turmoil this season.

Ronaldo has been one of United’s standout performers in what has been a disappointing campaign so far for the Premier League giants.

He’s hit 14 goals in 21 appearances this term since returning to the club after 12 years in August.

The former Juventus man added another to his tally on Thursday as United defeated Burnley 3-1 at Old Trafford.

However, he’s come under criticism in recent times during what has been a slow start for interim boss Ralf Rangnick, who replaced Ole Gunnar Solskjaer in the dugout after he was sacked in November.

United legend Gary Neville labelled him and Bruno Fernandes ‘whinge-bags’ and a ‘bad example’ to the younger players following their 0-0 draw with Newcastle on Monday and reports that he was unhappy at the club circulated shortly after.

Nevertheless, Mendes has insisted the player is enjoying his return to United and dismissed speculation linking him with a transfer away.

“He’s going to continue with his solid, great performances as always in his career.

Rangnick’s men are currently sixth, with a game in hand over the two teams immediately above them – West Ham and Arsenal.

They will be one point off Arsenal in fourth if they win their game in hand, having now gone eight matches unbeaten since Solskjaer was sacked in November.