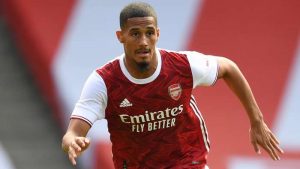 The French defender has linked up with Marseille on loan, but only after the Gunners tried to line up a deal that would keep him in England

William Saliba admits that he ignored Arsenal’s transfer advice when he “pushed and pushed” for a loan move to Marseille.

The highly-rated defender will spend the 2021-22 campaign back in his homeland after seeing a season-long deal put in place – having spent a few months with Nice last term.

Those at Emirates Stadium had been eager to see the 20-year-old remain in England, as they look to unlock his full potential, but those pleas fell on deaf ears.

Saliba told La Provence after being officially unveiled at Marseille: “I had a chat with Pablo [Longoria], with the manager.

“I knew that’s where I was going to play this season, with a stadium on fire and fans who expect a lot. For a young 20-year-old player, it can only do me good.

“I’m the one who chose Marseille. Arsenal preferred that I go to England, but I knew that here was the right choice. I pushed and pushed for it.

“Marseille is one of the best clubs in France, with a lot of fervour in the city and the country. You need to sweat for the shirt when you’re here.”

Has Saliba played for Arsenal?

Arsenal put a £27 million ($38m) deal for Saliba in place during the summer of 2019, with it agreed that he would stay on at Saint-Etienne for another season.

Once that loan agreement came to a close, the promising Frenchman made his way to north London.

Big things were expected of him, with the Gunners needing centre-half inspiration from somewhere, but Mikel Arteta favoured other options.

Saliba is still waiting on a competitive debut for Arsenal, having only figured in U23 fixtures so far, and saw 22 outings for Nice after linking up with them in January.

He is now looking to further his development at Marseille, but he remains under contract at Emirates Stadium through to 2024 and could still make a breakthrough there at some point.